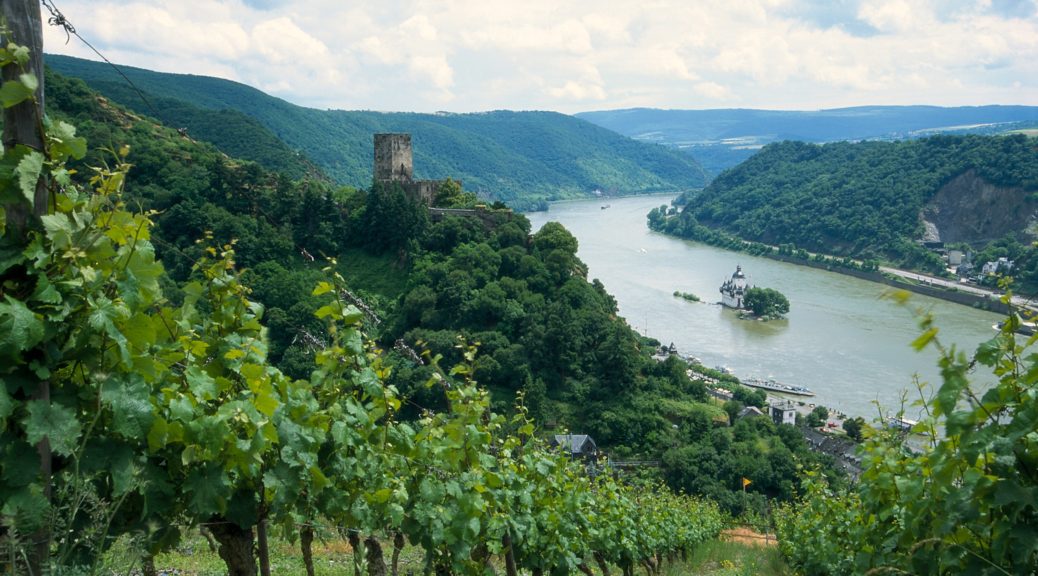 If, like me, you think most TV wine experts sound as if they have consumed too much rather than telling us anything sensible, imagine my trepidation at listening to actual wine producers. Add to that, the fact that these wine producers are predominantly young, incredibly enthusiastic people in Germany’s most celebrated wine growing area, the flood of fruity, flowery fabulousness would surely be unstoppable.

Fortunately, the over-the-top tipple-talk seems to be confined to our shores – or at least the wine producers, such as 25 year old Kilian Franzen and 22 year old Angelina Lenz at Rheinhold Franzen vineyard, speak in a language we mere sippers can understand. They also claim to work the steepest vineyard slopes in Europe.

Our trip took us from Trier, close to the Luxembourg border, along the gentle Mosel Valley until it met its big brother, the mighty Rhine, and down to Nierstein close to Frankfurt and Mainz. Along the way we did what all good travelers in this much visited part of Germany do: we admired the gorgeous countryside along the mellow Mosel and then steep-sloped Rhine – more of those slopes later, clicked away with our cameras at historic castles, towns and villages and savoured predominantly local, in-season foods.

After a wine tasting at vinothek Phillips-Mühle, set on rugged and steep terrain in the Lorelei valley, we too took to the waters for a leisurely cruise on the Rhine from St Goar to Bacharach where lunch was proceeded by tastings and a wonderful explanations of vine growing from the estate of Friedrich-Bastian. Dessert was ice cream. Yes, you’ve guessed – Riesling flavour – at Eiscafe Italia 76

Our ever increasing knowledge made being in the midst of so much wine growing countryside the more enjoyable as we cruised along, gazing at passing boats, yet more pretty castles and villages, and paying more attention than most tourists to those ever-present sleep-slope vineyards. Not driving, we were able to become experts very quickly indeed in the produce of those vineyards and, in the process, challenge the image of German wines that we seem to have grown up with at home. At first that most famous of Germany’s wines, Riesling, does indeed seem a too sweet drink for our palates, now accustomed to the sauvignon blancs and chardonnays, particularly, shipped by the boatful from Australia, New Zealand and South Africa to our shores. But on further taste examination, we discovered not only are there great variations in that level of sweetness – whether dry, semi-sweet, sweet or sparkling and similarly that each wine producer creates his – or increasingly her – own distinctive Riesling. And I have to say with hand on heart that after just three days of sampling possibly more than 100 different Reislings on the Mosel and Rhine, I am now converted and find the New World whites that I have drunk for too many years to mention too acidic. Before you wonder how I survived so many wines, most were a couple of sips and the rest of the glasses discarded – honest.

Producers also grow other grape varieties including one the Romans themselves grew, and even some red pinot vines, but Riesling is the region’s signature. This is a proud tradition and one which is enjoying a revival with new producers reclaiming sites that had been abandoned when shifting tastes – and the allure of better paid work – meant many vineyards were abandoned.  Wine production formed the basis of this region’s economy way before we tourists came along. Nowadays the local people talk about the sunny side of the river valleys (i.e. best for growing the grapes) but to the Romans one side was reasonably civilised Gaul while on the other the visitors were barbarian Germanic tribes.

All along the Mosel and Rhine, there are small towns and villages with accommodation to suit every budget, while many opt for the relaxation of river cruises not just for a few hours as we enjoyed but spending the entire holiday on the water. We stayed in the chic Augustine hotel in the lovely medieval town of Oberwesel just as the community geared up for the start of the annual wine festival – in October they are just about everywhere!

Whichever your option, you can guarantee you will never be far away from either a watering hole offering a good selection of the local wines, the vineyards themselves or the shop or tasting establishment where the wine producer brings the wines close to you. That could be in what just seems like a house in the village but is actually a small bottling plant as well as the home of the wine producer, and where you can arrange to go and try a selection of wines, or a luxurious chateau in the middle of a glorious estate stretching almost as far as the eye can see.

It is time to return to those young wine producers on their slippery slopes. Yes they will talk to you about the citrus flavours, the melon or gooseberries, but they will also explain how the wines gain these tastes along with how sweet or dry they are, how fresh or almost syrupy they feel in your mouth and even why some taste of the pieces of slate that the vines wind their roots between as they grow on those southern-facing slopes. I have to confess that some of the vineyards do fall foul of the wine luvvies in their leaflets, however, and I couldn’t help tease wine producer Daniel Vollenweider about his gorgeous wines were “winkingly evocative” of the steep slate slopes at Traben-Trabach. I do admit they did have a lovely mineral taste while his late harvest sweet wines were to die for. Just what you need before a fine lunch at the nearby, zany restaurant cum antique shop called Graifen.

Some producers can share other passions with you such as the unique Georg Müller-Stiftung estate which has a futuristic Kunstkeller where fine wines can be tasted as you explore modern art installations, while at the Castle Johannisberg you can sample the pleasures of the grape in exquisite surroundings and walk to Castle Vollrads, one of the world’s oldest wine estates, dating back to the 13th century and pick the odd grape or two. But don’t expect to find all these producers’ wines in your local supermarket. Although the producers are making something of a comeback in the UK they are not expecting to challenge the might of those New World producers who have such a hold on our market. Rather, many of the wines you will try on a wine tasting trip are only sold through a small number of outlets.

However, if you do cultivate a taste for a Riesling, whether winkingly evocative or just crisp and fruity, your local supermarket will have some to try. But what can compare with sampling the wines as you too admire the gorgeous views, such as from the terrace of the Raddeck vineyard overlooking picturesque Nierstein, while thinking up some outrageously flowery way to describe what is tantalising your taste buds?