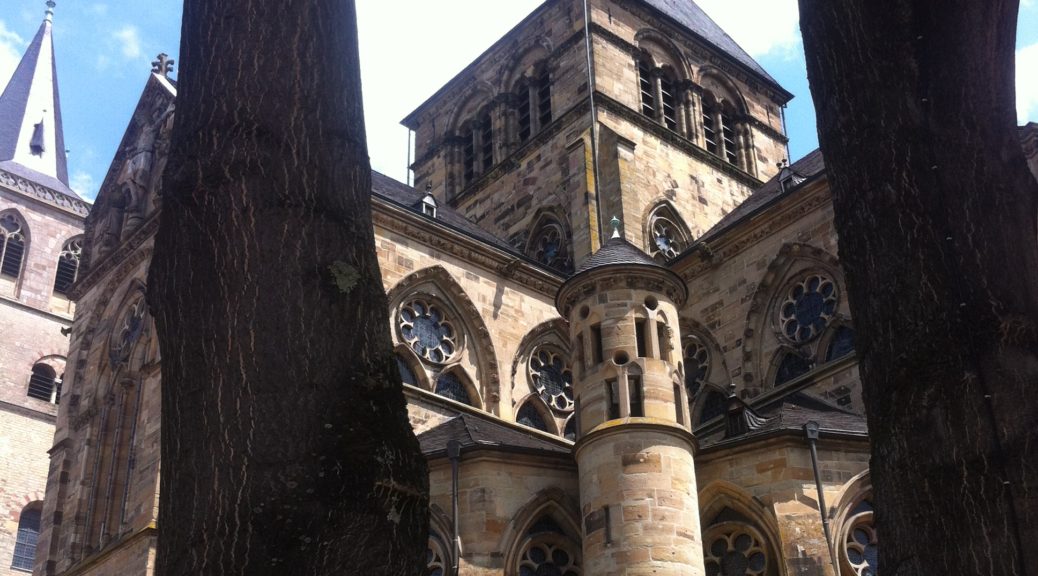 “What are those windows balanced on your nose?” our toga-wearing guide Heidi asked me before embarking on a tour of Trier where 2,000 years of history pass under your feet in an afternoon’s stroll.

“I have heard these vehicles have horse power but I am looking and I cannot see the horses”, she continued, staying in role as a Roman citizen of the city that was once known as the second Rome and is so closely linked with the first Christian emperor Constantine.

Fortunately, Heidi decided she didn’t need to stay in role with us and although she wore her toga (I could swear with a pashmina over it), the guiding for our little group returned to the contemporary. Our visit to Trier, so close to the Luxembourg border that the locals are just as likely to go shopping there than Cologne, followed the interests of the hundreds of thousands of visitors who come to this city: history from the Roman, through Gothic to the Baroque and the food and particularly wines produced in the Mosel Valley.

Our first encounter with Heidi had involved a pleasant evening stroll through the glorious Porta Nigra – the city’s last remaining Roman gate-tower – through the pedestrianised streets stopping to admire picturesque houses, eyebrow raising allegorical fountains – what is that monkey looking at in the mirror held underneath him? – and churches that in their day displayed the sort of architectural rivalry we now see with cities competing for the world’s tallest skyscrapers.

Having built up a good appetite, it was off to the two Michelin star Becker’s which boasts “the highest degree of quality and creativity” in its food resulting in one of those meals that was as good to look at and ponder not only what was in each course but how it had been made. This evening also gave us a welcome introduction to some of the finest wines from the region as we chatted with our host Christine Becker who opened the restaurant and also hotel with husband Wolfgang.

Yes, in Trier you can drink beer and I am sure if you looked hard enough you would find somewhere serving sausage and sauerkraut. But this is undoubtedly the land of Riesling, grown on the slopes of the Mosel and all the way to the Rhine and beyond. The food here seemed lighter and, well, more refined than the image of Germany fare and is as international as anything you would expect in any major destination city.

Refreshed, we met up again with Heidi for our real Roman holiday, visiting the vast roman baths and like excited children exploring the underground corridors, learning about underground heating systems, and the elaborate water supply system and then encouraged to imagine what this palace to bathing and exercise must have once looked like. Similarly, the city’s amphitheater requires a fair bit of imagination to picture the tens of thousands of citizens on the now disappeared stone seats that rose up from the killing ground. Here too you can explore underground to where gladiators, prisoners, wild animals and probably Christians were kept prior to their starring roles in the blood frenzy entertainments. In the summer there are re-enactments of gladiatorial combat as part of the Bread and Circuses festival are held although I am certain all the combatants live to fight another day.

The most famous icon of the city is the Porta Nigra, built in the 2nd Century AD of light sandstone and now blackened by centuries of pollution. Heidi tells us it probably could be cleaned but then what they do about its name? Interestingly it is only because that other imperial conqueror Napoleon ordered a church blocking the view of the gate to be demolished that we enjoy this remarkable edifice in all its glory.

While the Constantine Basilica is not what we would possibly expect from a surviving Roman building  as it is a solid brick construction rather than bulky stone blocks, it is nonetheless an awe inspiring reminder of the power of imperial Rome, Constantine’s  impact on the empire and, of course, the development of European religion.

Incongruously it has the Electoral Palace – a pink and white Rocco piece of nonsense – tacked on to the end which I would demolish in the same way as Napoleon demolished the church defacing Porta Nigra. But others love it.

Leaping forward closer to our own day and in Bruckenstrasse is where Karl Marx was born and there is another house where he lived.

I have no idea if Karl was fan of the grape but it would be revolutionary not to visit Trier without at least one wine tasting and choose well and you could also find out the fascinating story of the development of viticulture from those Romans who planted their vines on the sunny slopes of the Mosel and Rhine while keeping a sharp eye out for those Barbarian hoards of Germans heading from beyond the boundaries of the empire.

The Romans wouldn’t recognise the Riesling wines we are familiar with today – they grew a different grape variety and some producers are reintroducing it to tempt our palates. But no doubt after a heavy day’s marching they would be glad to slip into a toga (no doubt without a pashmina), relax into the baths and down a few.