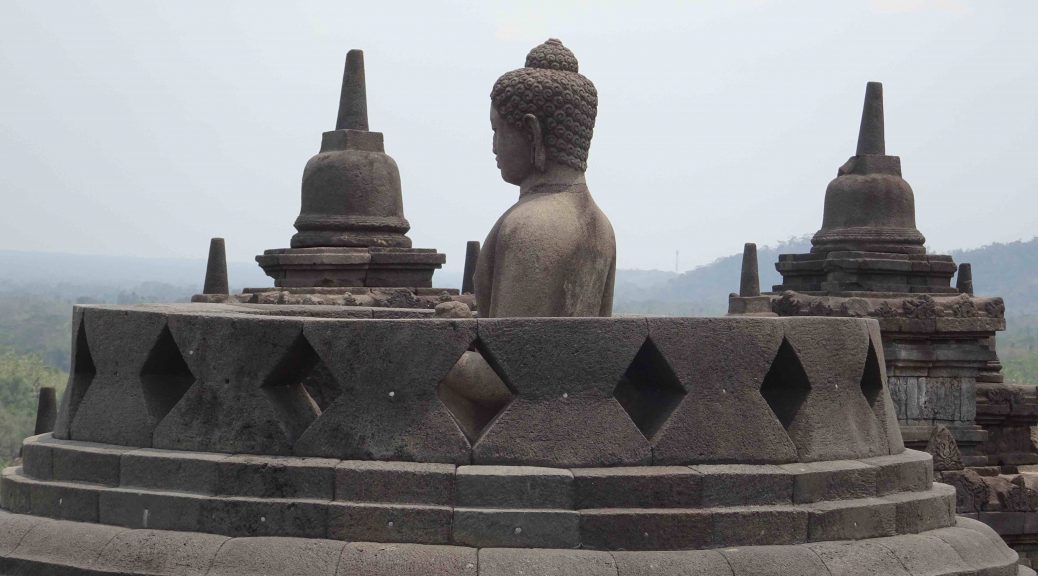 The traditional dancers in their exotic costumes were already coaxing tourists, having sampled the Indonesian lunch buffet, slugged down thirst-quenching drinks and commented on how hot it was, to join them on the stage.

But Mad Dogs and all that. So we valiantly cooked under the by now seriously hot sun as more and more of our group headed for the lunch shade having decided they had seen enough carvings, climbed enough steps and listened to enough explanations for one day.

So the number of visitors still ascending the 12 platforms to attain Enlightenment or, as we call it, heat stroke (the first nine platforms are square and the last three circular) grew fewer and fewer until by the time we reached the top of the remarkable temple of Borobodur we were a select few.  Stupified by the heat maybe but certainly appreciative of the 72 small stupas surrounding one central stupa, each containing a seated Buddha gazing out through the decorative openings.

The views out across this area of Java are stunning with mountains and volcanoes in the far distance, lush vegetation and cultivation all around – a far cry from the throng of humanity in the built-up parts of this island that is home to the majority of Indonesia’s 260 million people.

For some idea of the scale of this majestic structure, the largest Buddhist temple in South East Asia, the first level is  approximately 118 metres (387 ft) on each side and every inch covered in the most exquisite carvings and the levels move from Kamadhatu (the world of desires), Rupadhatu (the world of forms), and finally Arupadhatu (the formless world).  The subject matter and style of the carvings follow this story from lowly animals to divine beings to ultimate, well, nothingness, nirvanah.

For me this was a life’s ambition fulfilled. As a youngster I somehow came to possess a book of World Architecture. The chapter on Civilisations of the East opens with Borobodur and it had long been at the top of my wish list of destinations. So there was no way a little tropical sunshine was going to stop me walking the entire route of pilgrimage to see the whole story of the life of the Buddha and pick out the stories in those bas relief sculptures that I recognise.

But I have to admit to being be very glad of the cold drink and restorative sit down and then chat with fellow travellers over lunch in the shade, with electric fans whirling behind us.  Restored and after a quick shimmy with one of the dancers it was onto the coach and the impossible to resist snooze on the way back to our ship.

Some cruise to, well, cruise and enjoy all the activities on the ship from learning bridge, joining a choir, handicrafts, reading and drifting off, sampling exquisite teas and even more calorific afternoon tea, or just while away time sunbathing on deck. With only up to 880 passengers (and our cruise was not at capacity) there is none of the feeling swamped by vast numbers of people. Rather, you get to know crew members and find yourself chatting to the officers.

Don’t get me wrong. I have spent many a trip that involved hours and hours and even more hours on long road journeys, or as much time in small airports and bumpy flights than on the ground, and endless train journeys that make even the British rail system seem quite pleasant. But there are some destinations where ships just make sense – and not just the allure of the pool, promise of cocktails, health spa pampering, fine dining, and no carting bags around from hotel to hotel.

Try looking at a map of Indonesia and it quickly makes sense.

The territory of the world’s largest archipelago stretches over 1,000 miles from north to south and over more than 3,100 miles from east to west. No one exactly knows how many islands it includes and there is a definition of what counts (or can be counted) but it is somewhere near 14,752. In 2020 it lost a couple, Litigan and Sipadan, to Malaysia, which was the same year East Timor broke away.

So where to start? You think the capital city would be a good place to start and therefore it would be a bit odd to start in another country – Singapore.  Sadly all the advice we were given was to avoid Jakarta and it seems even the Indonesians have taken this advice and are to build a new capital city elsewhere!

Our Fred Olsen Indonesian Islands Discovery cruise actually started for us in Singapore, a city state I had visited back in the day before its most iconic modern attractions had been created including the incredible Marina Bay Sands Hotel – you know the one that looks like three towers with a surfboard over the top – and the futuristic trees in the Gardens by the Bay that include the Flower Dome and the Cloud Forest conservatoires. The Flower Dome is the largest greenhouse in the world. The son et lumiere around the trees was something but was immediately followed by another over the water with lasers projected onto sheets of water.

Singapore is a patchwork of ethnic areas, each retaining its own feel, and threaded through the middle the old river with enough of the old colonial buildings to conjure the origins of Singapore as the quintessential entrepôt of the Far East. We cycle-rickshaw round the Indian quarter and cool off at the Raffles Hotel in the Long Bar for a Sling. This is an amazingly clean city (chewing gum is very sensibly banned) so it is a quirky pleasure being able to throw your peanut shells onto the floor in the Long Bar.

We barely scratched the surface of this fascinating and ever-changing city and give it a few years and I will be back to see the next batch of iconic buildings, explore more old colonial life and the genuine melting pot of peoples and cultures that makes up Singapore.

Our ship, the Boudicca, has sailed all the way from Dover many weeks before and passengers had come and gone along the route with a lucky number who had signed up for the entire cruise that was to return to Dover 180 days after setting sail.

After a couple of days at sea our island itinerary started at the port of Semarang, Java from here we made the day trip to Borobodur. Sailing on, another highlight was Lombok. This was what Bali used to be like, we were told by fellow travellers who had been to these shores in earlier decades. The appeal is instant. From Lombok we raced across the sea in smaller boats to the Gilli Islands and the chance to put on a snorkel, get into those gorgeous clear waters and float languidly with the reef fish coming to investigate their long, long lost to the land cousins.

Speaking of evolutionary wonders, we stopped at Komodo island to meet the dragons. These are gigantic crocodile-sized lizards that inhabit the island. We arrive at the park and first encounter a juvenile Komodo dragon hiding in the undergrowth at the base of a tree. Komodo dragons eat the young – new-borns have to scamper up the nearest tree at birth to avoid being eaten by their mothers – the Komodo dragon is short on maternal instinct and morals in general. We then come across a group of huge adult dragons lounging by a pool almost asleep in the hot sun. Then one opens a malevolent eye and you realise that you are one vigilant ranger away from a very long and painful hospital stay at best. Komodo dragons inflict a bite and the bacteria in the bite are so poisonous that a slow death over some days awaits while stalked by the malign lizard so it can devour you at your demise. The park is also populated with wild pigs and deer that win hands down in the cuteness stakes but it is best not to think what they are doing there.

We return to the village for drinks and trinkets. I usually reserve an equally malevolent eye for such touristica though I have not bitten a hawker yet but there seems so few potential customers in this out-of-the way island that I succumb to a Komodo dragon fridge magnet to remind me of all the evil that lurks in the world.

The afternoon is spent snorkelling on an even finer reef than we had enjoyed at the Gilli Islands. There is something about lying on the meniscus of the ocean suspended between water and sky gazing in awe at the variety and colour of the marine life below. Quite how this could be the result of the mechanical process of evolution is still not clear to me and it is hard not to see the hand of an artist at work – hardly survival of the fittest, more survival of the most radiant. Lunch appears and again I puzzle how some rice, chopped fruit and veg, freshest of fresh seafood, a can of sprite and an appetite borne of a morning flapping through the water can delight more than a taster menu at a Michelin star. With a bit of lounging on the beach chatting to fellow passengers and a walk along the sand meeting some cheerful local girls swimming fully-dressed, we head back to the ship.

Our last island was the most famous, Bali. This is our first visit and with limited time we can only sample excursions that are practical from the ship. It immediately becomes apparent that the southern part of the island has become a victim of its own success so we kept well away from the resorts adored by the young Australians and back packers from even further afield. We chose to travel a little further from the main port of Denpasar and try to ignore the tourist tat along the way to the centre of the island. On this trip we didn’t have time to explore the remoter, more beautiful parts of the island beyond getting a taste from the emerald green of the rice paddies and the intricate contour-like terraces slung between the mountain ridges and traditional villages, with bright painted temples and leering gargoyle guardians, that punctuate the landscape. We stopped at Ubud to see the famous monkey forest (everyone loves monkeys) and stroll along the town’s narrow streets and dip into markets.

One evening we went to watch the Kecak Fire Dance at the Uluwatu Temple which was actually rather good with concentric rings of seated local men in loin cloths accompanied just by the men’s chant.

More and more tourists crammed into the open air arena on the edge of the sea, filling the terraced seating and eventually later-comers are tightly squeezed into rows on the ground just behind the seated performers.

The show itself is peppered with visits from gods, elegant goddesses and the odd demon in elaborate Balinese costumes that must take hours to don. The demons bring humour and so steal the show.

The highlight is watching the sun slowly, slowly setting behind the cliff-top temple and then, as the sunset colours die down, the fires of the dance flare into life including the burning of Hanuman the monkey god.

Fortunately, the dancer playing Hanuman is blessed by a suitably garishly costumed priest and performs the fire kicking dance. Even more fortunately the chanting dancers are charged with putting out the still glowing embers before any of the audience members are immolated.

Cocktails and dinner on board awaits and sadly so too does our return flights to the UK. Like our snorkelling, we have dipped into Indonesia, let just some of its wonders wash across us and dived a little deeper into some.

A Fred Olsen cruise that includes some of these destinations is the Black Watch’s 24-night W2105 ‘Exploring Australia & the Far East’ fly-cruise, departing from Sydney, Australia (flights from London Heathrow/Manchester) on 5th March 2021.