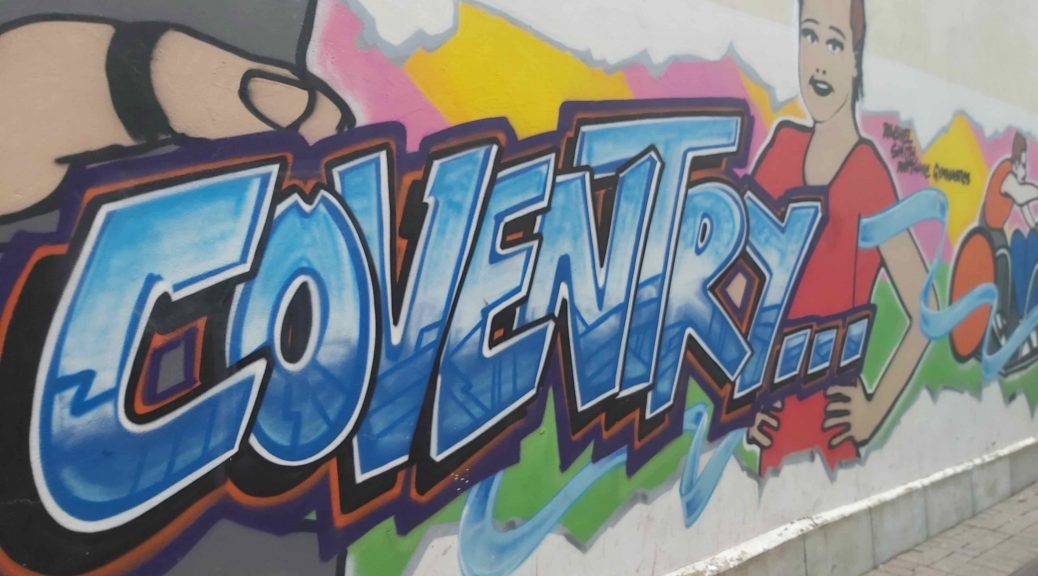 Having pipped Swansea to being the UK City of Culture for 2021 it seemed only fair to visit Coventry to see what this city has to offer beyond the cliché of Lady Godiva and reputation for not particularly attractive post war reconstruction.

Straight away a confession – I went for a job interview in Coventry in the very early 1980s and didn’t get it. I remember not only a horrible interview but a pretty bland city and nondescript buildings and a rather brutally modern cathedral. The building where I had that interview is now a hotel and I certainly did not stay there! However, the city has been transformed in the intervening years and it the modern city centre is one of the most pleasant, open and people-friendly that I have been to with fountains, lots of green areas, welcoming squares, clever use of shopping centres arcades as walkways between those squares and all the usual shopping you would expect.

The City of Culture has a diverse schedule of activities and October until January is also the third Coventry Biennial which features local artists and curators, which itself includes a wide range of artistic, heritage, business and community locations. The biennial is titled Hyper-Possible, celebrating Coventry’s radical history.

However, if your visit does not coincide with City of Culture there are ample reasons to make the two-hour drive to the Midlands.

One highlight of our visit, for example, was rediscovering the cathedral and surrounding. The medieval St Michael’s Church was destroyed in November 1940 when the city was fire-bombed. Yes, the new building, designed by Sir Basil Spence, remains an austere construction with the tapestry by Graham Sutherland still at first sight garish in its modernism and it is actually better appreciated close up and the stained glassed windows remain the finest feature of the construction, along with the archangel and devil sculpture on the external walls. However, the square outside the cathedral is bordered with Coventry University and the Herbert Art Gallery and Museum, forming an impressive cultural and education heart of the city.

I spent far more time than I expected on the ground floor exhibition of the history and development of Coventry from its medieval importance, the development of the city’s industries and more contemporary cultural life, including fabric manufacture, engine design, and the contribution to the music, fashion and lifestyles from people who made this their home over the centuries. If you love all things on wheels the Coventry Transport Museum also tells the city’s engineering past when car manufacturing dominated employment and the exhibits range early bicycles, engine simulators, and Queen Mary’s Daimler.

The city may have been heavily bombed but there are many medieval buildings surviving from the Guildhall in the Cathedral Quarter, remains of former monastic establishments, half-timbered old buildings and even sections of the old city walls. Just outside the city’s ring road the Charterhouse Priory of St Anne. This is a lively and vibrant city and some of the old buildings now contain cafes, bars, restaurants including one of England’s oldest public houses on Spon Street which edges the modern entertainment complexes..
It might be called Warwick Arts Centre but the cultural centre is much closer to Coventry, and hosts films, plays and performances so when visiting check in advance what is scheduled and how COVID-19 affects your visit. This also applies to the Belgrade Theatre, and the Tin Music and Arts Centre in the city’s Canal Basin.

Lady Godiva is said to have made her famous naked horse ride as a bargain to liberate the Coventry citizens from the heavy taxes in the 11th century. She is now most visibly celebrated with an elegant statue in the city’s central square, Broadgate. The William Reid-Dick sculpture was unveiled in 1949 and is Grade II listed. Just a stroll away from the fun dancing Coventry Centre Fountain at the heart of the £11 million Upper Precinct redevelopment that opened in 2019.

For more information including events and attractions: coventry2021