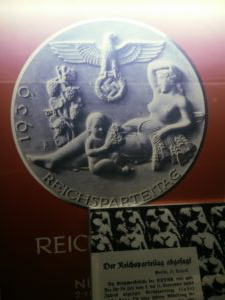 On my first two visits to Nuremberg you have to take yourself off to find the monumental structures built by Germany in its Nazi period. While the city was keen to show off its magnificent medieval past, castles, walls, churches, the home of its famous son Albert Durer, beer halls and restaurants, the ever lingering shadow of its shameful past was kept just that, a hidden shadow.

Now there has been a rethinking of what to do about the structures remaining from that terrible time when the National Socialists chose the Bavarian city for it showpiece events, most famous being the torchlit rallies but the were plenty, plenty more,  and has decided to make them educational, counter-Nazi propaganda tools to continue the re-education of the Vol about the mistakes, errors and crimes of Aryan ideologies, eugenics and genocide.

The most infamous site from where Hitler addressed the tens of thousands of adoring, no loving, German men women and children, is slowly crumbling and it is now being debated whether to spend the millions of Euros needed to keep it standing. The other main edifice, a vast brick built Congress that wartime stopped from completion, has now been rather scarred with a modern museum with a glass and steel structure, a dubious “spear” through Albert Speer’s architecture – gettit? It is now called the Documentation Centre.

You can see other constructions (which conveniently have been classified as non Nazi and so are okay) and massive roadway parade ground for the staging of other mass propaganda events, the style and form of which reflected historical parades and celebrations from the Rome to British Empires and with such shows of strength, patriotism, love of the nation, cult of the personality etc are still  staged from North Korea to Washington.

Nuremberg is also infamous for the victors’ trials of the prominent Nazis, both the military tribunals and then other subsequent trials, the hanging of Nazi leaders, the jailing of others, including the charming and post war successful Speer, and acquittal of others who could not be proven to have been guilty.  Courtroom 600 remains a working courtroom. It has been turned back to how it was before expansion to accommodate the tribunal and trials but much remains as you would have seen from Hollywood’s versions and contemporary newsreels. It is still a working court for now and in all honesty it is impressive for what happened there rather than the building itself. You can listen to recordings and watch videos of the events but it is the “just being there” that is of interest. Fascist columns have been replaced in Nuremberg with  pillars with UN human rights declarations. A different type of propaganda, a different monumentalism, for a city still shaking off a guilty past.

Modern Nuremberg shows off all aspects of its history from wonderful trams from every period since their introduction, the art nouveau and 1950s are the most elegant, and this is the city of Germany’s first train and resting place of George Stephenson (who say only the Chinese rip off designs from other countries?), beer gardens and taverns, extremely stodgy meat and potatoes and dumpling based food – they die younger here but claim they live better than other parts of Germany. You would not necessarily come here for fine dining and vegetarians need to fill their brains not their stomachs as protein equates with pork.

It is also a great city for musical associations with the square outside the opera house called Ricard Wagner Platz, another huge personality temporarily shoved into the shadows after the war because of Hitler’s fondness for the composer’s questionable Aryan Volk tendencies, but the rehabilitation is pretty much complete now. So expect strains of the Ride of the Valkyrie occasionally breaking the plodding oompah bands.

Just an hour by, expensive, fast train from big brother Munich, it would be a shame not to visit this city that says it is Franconia within Bavaria and where lederhosen are NOT the national dress. It was Napoleon who lumped the city state in with Bavaria when that other megalomaniac who came a cropper when taking on Mother Russia made the latter a kingdom as part of his carving up of Europe.

Time it right, may, and you can enjoy a fun local event called Blau Nacht, Blue Night, when zany light installations illuminate the castle, the locals hit the beer in the main squares, and cultural institutions stay open late. It is very busy and has its charms but equally you may be better advised to visit when it is less raucous, you can get served and you can discover your own quieter, calmer, more elegant Nuremberg experience. Artefacts in the Documentation Centre Inside the unfinished Nazi Congress building